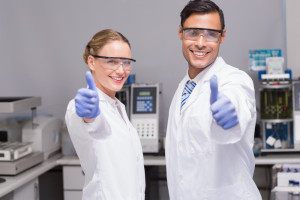 A physician may order mixing studies when a patient’s prothrombin time (PT), activated partial thromboplastin time, (aPTT) or both PT and aPTT are prolonged outside the upper limit of the laboratory’s established normal range.

Determining the cause of the prolongation

It is important to determine if the cause of the prolongation is due to a factor deficiency or circulating anticoagulant (inhibitor). In general, a mixing study consists of mixing an equal amount of the patient’s plasma with an equal amount of normal plasma then running the affected test immediately and after an incubation period. Simplified, if the patient’s plasma is “deficient” in one of the factors, the normal plasma (which has normal factor levels) may or may not correct the clotting time back to within the normal range. Confused yet?

What if the mixing study does not correct?

The prolongation may be due to an inhibitor. There are three types of inhibitors to consider:

Many variables can affect the quality and performance of the mixing study, ie. the prolongation of the initial clotting time, the sensitivity of the reagents being used, the dilution used in the mixing study (1:1 or 4:1), the normal pooled plasma (NPP) that is used for the mix.

The quality of the NPP is considered by many to be paramount to a successful mixing test. The NPP should resemble the patient’s plasma as much as possible. It is imperative that the PT and aPTT of the NPP fall within the laboratory’s reference range. In addition, the NPP should be prepared from a minimum of 20 normal individuals (equal ratio of male to female), platelet poor (< 10 x 109 /L), tested negative for LA and have coagulation factor activities > 80%.2

How to get the most accurate results?

As the old saying goes, “Your lab results are only as good as the sample you get!” Consider these possibilities:

The are a number of different methods that can be used for determining if a mixing study has corrected. Some labs use a correction of anywhere from 2-5 seconds of the upper limit of the PTT normal range. Others compare the PTT mix result with the PTT of the pooled normal plasma (PNP). There are standardized methods in literature that are described below:

The Chang ‘percent correction’ formula has also been found to be very effective when performing a 4:1 mix of patient plasma (PP) and normal plasma (NP). Due to the variation in instruments and reagents used by individual laboratories, each laboratory must establish its own optimal reference cut-off value from known samples to use as a criterion for the interpretation of results.4

What conclusion can we draw from this?

Unfortunately, there is no magical formula for determining a mixing study correction. Most agree though that each lab should have a standard process for performing and interpreting mixing studies.