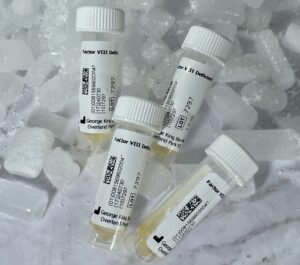 During the immunodepletion process, not only is the Factor VIII removed, but the vonWillebrand factor is removed as well. In his article “Standardization of Assays of Factor VIII and Factor IX”, Barrowcliffe states that using a Factor VIII Deficient Plasma also deficient in von Willeberand, “violates one of the basic principles of coagulation assays, i.e. that reagent systems should be deficient only in the factor being measured.” [1]

Congenital deficient factor VIII deficient plasma is also preferable to immunodepleted when testing for inhibitors. In his article, “Diagnosis and Quantification of Factor VIII Inhibitors” B. Verbuggen explains, “The FVIII inhibitor assay is rather complicated and includes critical analytical stages and variables that need careful handling to get reliable results.” [2] He goes on to state, “The type of FVIII deficient plasma used as control sample and substrate plasma in the residual FVIII activity greatly influences the inhibitor test results. Inhibitor titres derived from assays with vWF free immunodepleted FVIII deficient plasma as control sample and as a substrate plasma in the FVIII assay were 30 to 50% lower as compared with titres of assays using vWF containing deficient plasma, most probably because of the stabilizing effect of vWF on FVIII activity.” The author also says, it is strongly recommended to use vWF containing FVIII deficient plasma.”[2]

Consider the advantages of choosing congenital factor deficient plasmas for your laboratory needs. Testing plasma that is most like your patients will enable you to report your results with confidence.