History of the disease

The first written piece describing this inherited bleeding disorder was published by a Finnish physician, Erik von Willebrand, in 1926. His studies began with an assessment of a family living on the island of Foglo in the Aland archipelago in the Baltic Sea. Eventually, the father and all four members of his family passed away as a result of the bleeding disorder.

In this initial study, Dr. Willebrand noted that the patients had a prolonged bleeding time despite having a normal platelet count, and exhibited an autosomal dominant mode of transmission of the bleeding problem. After this discovery the disorder was named after its discoverer, Dr. Willebrand.

During the 1950s and early 1960s, it was realized that this condition was also typically associated with a reduced level of factor VIII (FVIII) activity, and that this deficiency could be replaced through the infusion of plasma or plasma fractions. In 1971 a significant advancement was made by two groups of investigators who showed, for the first time using immunologic assays, that FVIII and von Willebrand factor were distinct proteins.

The distinct nature of VWF was demonstrated by the characterization of the VWF gene in 1985 by four independent groups of investigators. This discovery led to an improved understanding of the genetic basis of VWD. Additionally, this led to new possibilities for approaching the condition. [2]

The gene for von Willebrand factor is on one of the autosomes, chromosome 12. Since it is not on the sex chromosome, it occurs equally in men and women. [3] If only one parent has a dominant inheritance type of VWD, with each birth there is: 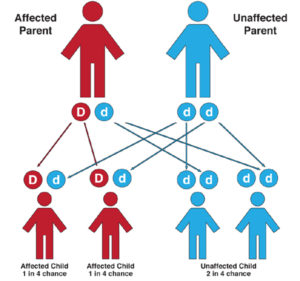 The following test results are provided on von Willebrand plasma: